How Are Volatility and Risk Related in an Investment?

The stock market is very volatile this year. In fact, we have not seen this much volatility since the days running up to the financial crisis that ushered in the Great Recession. Investors and traders seem to be of two minds. First, many are worried and are getting out of investments that have been very profitable over the last few years. Second, many see the market correction as an opportunity to buy and gain profits, at least in the short term. Who is right and how should you proceed in the face of increasing volatility? In this regard, how are volatility and risk related in an investment?

CNBC writes that stocks have not seen this much volatility since the financial crisis.

The S&P 500 has moved by at least 1 percent around 40 percent of the time so far this year. When annualized, that rate translates to the most moves of that degree since 2009. 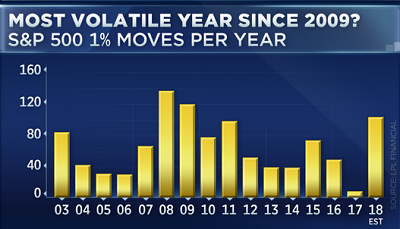 Investors have been happy with steadily increasing earnings, especially in the tech sector which have made stocks like Apple such profitable investments.

Obviously, picking a successful company like Apple worked out better than diversifying across the US economy with an S&P 500 index fund. But with Apple just like the S&P 500 you could have bought at the high point before the crash and still have gained after the recovery. The key is the concept we often mention, intrinsic stock value. How does the company make its money and how will that work out in years to come?

But there are red flags that investors need to watch. These are 1) the risk of a Trump trade war, 2) military adventurism in places like Syria and North Korea, 3) the steady ramping up of investigations into Trump and associates starting with Russian meddling in the US electoral process and spreading out from there. And on top of this is the risk of a meltdown at the presidential level of the US government as Trump uses “reality show” tactics to deal with escalating problems.

There were people were wiped out in the 2008 market crash. And there were those who made fortunes in the market meltdown by shorting various investments. And there were people who simply kept their investments and are just fine today as we noted in recent article about profitable investments. Obviously, the most profitable approach is to buy when prices are low and sell when they are high but market timing can be chancy. Warren Buffett had something to say about volatility versus risk in a newsletter a couple of years ago. Business Insider quotes Buffett in saying that volatility is not the same thing as risk.

The unconventional, but inescapable, conclusion to be drawn from the past fifty years is that it has been far safer to invest in a diversified collection of American businesses than to invest in securities – Treasuries, for example – whose values have been tied to American currency.

Stock prices will always be far more volatile than cash-equivalent holdings. Over the long term, however, currency-denominated instruments are riskier investments – far riskier investments – than widely-diversified stock portfolios that are bought over time and that are owned in a manner invoking only token fees and commissions. That lesson has not customarily been taught in business schools, where volatility is almost universally used as a proxy for risk. Though this pedagogic assumption makes for easy teaching, it is dead wrong: Volatility is far from synonymous with risk.

These are words of the world’s most famous and successful long term investor (and the richest man in the world despite giving away several billion dollars a year). For the short term investor and stock trader volatility and risk are closely related. In our article about how many years are needed to make an investment long term we noted that 5 and more likely 10 years is correct. Anyone who invests with this time horizon can be less worried about the risk of short term volatility.

Where Should You Invest Your Tax Refund?

What Are the Most Profitable Investments?