With the recent default by Argentina on sovereign debt payments it may seem a strange time to look at how to invest in Argentina. But, the old adage is to invest when there is blood in the streets. The point of this quote from Baron Rothschild is that when things look their worst in when it is time to pick up the best deals. The inversions.gob.ar website from the Argentina Ministry of Foreign Affairs and Worship notes the following:

From this website, you can access the Productive Investment Opportunities Database (BaPIP, for its acronym in Spanish), a vital tool designed to connect potential investors worldwide with the wealth of investment opportunities existing in Argentina.

On this site you can pick a sector such as agribusiness, a subsector such as stock breeding and a province such as Pampas to start to invest in Argentina.

Positive Reasons to Invest in Argentina

If you want to invest in Argentina what are the advantages and disadvantages? The economy of Argentina is in trouble and foreign capital will be welcome. And the Argentine Peso has weakened so that things are cheaper there if you bring Dollars, Yen or Euros. Google Finance shows a chart of the ARS versus the USD, the Argentine peso versus the US dollar. 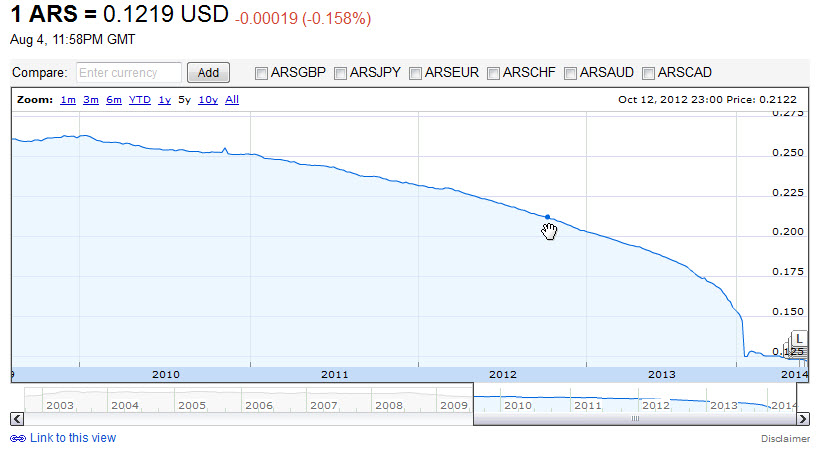 Ten years ago an ARS was worth 35 cents and four years ago it was worth 25 cents. It passed the 20 cent mark at the end of 2012 and the 15 cent market at the end of 2013. As of this writing 1 ARS is equal to 12 cents. A positive reason to invest in Argentina is the weakening Argentine peso. Argentina has rich natural resources. According to The World Factbook, published by the United States Central Intelligence Agency:

Argentina benefits from rich natural resources, a highly literate population, an export-oriented agricultural sector, and a diversified industrial base. Although one of the world’s wealthiest countries 100 years ago, Argentina suffered during most of the 20th century from recurring economic crises, persistent fiscal and current account deficits, high inflation, mounting external debt, and capital flight. A severe depression, growing public and external indebtedness, and an unprecedented bank run culminated in 2001 in the most serious economic, social, and political crisis in the country’s turbulent history.

A combination of a rich natural resource base and cheap investments could make it promising to invest in Argentina.

Risks of Investing in Argentina

A look at the history of Argentine currencies over the last forty years or so shows why one does not want to retain earnings from Argentina in an Argentine currency. Since 1969 Argentina has gone through several currencies and essentially added nine zeros after the decimal point. This is to say there has been trillion-fold devaluation of the Argentine currency in forty-five years. And Argentina has had the tendency to nationalize foreign industries such as when they nationalized YPF, which was owned by Repsol of Spain. This was shortly after YPF discovered the fourth-largest reserves of shale oil and second-largest of shale gas in the world in the Vaca Muerta field in Neuquén province. Chevron has cut a sweetheart deal to start developing this find as the cost of developing the entire basin will be in the $60 billion range and Argentina will have trouble borrowing from foreign sources due to its history of debt default.