Over the coming decade China will pose a risk to Taiwan, neighboring countries in the South China Sea and the USA and its allies like South Korea, Japan, Australia, and India. An article in Foreign Policy describes the coming years as a dangerous decade of peaking Chinese power. In this regard, we see a ten year risk from China to your investing. How did this come about, what are the possible outcomes, and how can you adjust your investing to survive and profit.

How China Developed As an Economic and Military Power

China was largely isolated from the world when President Nixon visited China in 1972. Nixon’s strategy was to re-open relations with China after 25 years in order to gain advantage over the USSR which, at that time, was the “other” global power. Opening China to foreign influence was another goal as businesses looked at China’s huge population as both a source of cheap labor and an emerging market that would buy goods from abroad. Parts of this worked out for the West and parts did not. 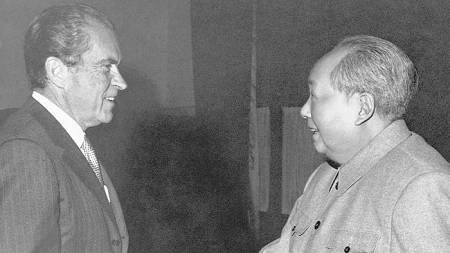 Premier Deng Xiaoping in the 1980s introduced market economy reforms in China. This provided incentives that previously did not exist. The Chinese economy moved from an agricultural base to a manufacturing base over the next decades. China passed other nations in manufacturing capacity one by one and the USA in 2010. China achieved this success by emulating parts of what Great Britain did to start the Industrial Revolution.

The St. Louis Federal Reserve published an informative article about how China went from an agrarian society to an industrial powerhouse in only 35 years. In 1978 when he came to power after the death of Chairman Mao, Deng Xiaoping laid out a plan for a Chinese industrial revolution, the fourth try by China since the 19th century. Learning from past mistakes he set up these steps as detailed in the St. Louis Fed article.

He ignored advice of Western economists (unlike Russia in the 1990s) and started very gradually, adjusting the approach as results dictated.

China’s biggest trading partner by the 1980s was the USA. Its cheap labor attracted foreign businesses that set up manufacturing in China and then exported back to the rest of the world. China studiously copied what these businesses did, insisted on trade secrets for the “right” to work in China and then developed their own businesses. Entry into the World Trade Organization in 2001 was a key step in China’s rise to economic power as it gave access to previously closed markets.

Ten Year Risk to Your Investing From China

China has not risen to its current stage of power without costs. China has a huge amount of debt to deal with as evidenced by the problems in its real estate sector. The one couple one child policy has now left China with a demographic disaster as workers are retiring and there are not enough to replace them. Meanwhile, they have gotten more aggressive in terms of maintaining political stability (first rule in their plan) and asserting control over adjacent areas like Taiwan and the South China Sea. Their power is peaking this decade and will taper off as more and more nations follow an anywhere but China approach to their supply chains. This situation, as we will explore further, is fraught with risk for investors in the USA and everywhere.

Tags: china’s access to foreign markets, how china developed as an economic and military power, introducing modified capitalism in china, ten year risk to your investing from china
Previous Post