Today we want to look at investment and Panama Canal Expansion delays. A consortium of Spanish, Italian and Panamanian companies won the bid to build the new locks for the Panama Canal with a bid that was a billion dollars lower than that of the next higher bidder. That bidder, led by Bechtel, was quoted as saying that the consortium that won the bid could not pour the cement for $3 billion while they bid the entire project for $3.25 billion. Today the chickens have come home to roost as the Spanish led consortium is asking for $1.6 billion extra to continue the project and use of European Union negotiators to arbitrate. The Panama Canal Authority notes that the contract has provisions for contract disputes and none of those provisions include bringing in a third party! As the Panama Canal Authority re-negotiates with the consortium we concern ourselves with investment and Panama Canal Expansion delays. The project was originally to be finished in 2014. Then 2015 became the end date and now it may be much later.

The United States built the Panama Canal and used it as a military asset. When Panama took over the operation of the canal at the very end of 1999 it upgraded the canal for commercial shipping and ran the canal for a profit. Today the canal pays a billion dollars a year directly into the Panama treasury and is the center piece of ports, container terminals, and the second largest free trade zone in the world. Panama decided to build a new set of locks to accommodate larger ships which is the start of our fundamental analysis of investment and the Panama Canal expansion.

Bigger Boats Will Be Able to Use the Panama Canal

The new locks will be 55 meters wide by 407 meters long. Oil and natural gas tankers will be able to ship directly through an expanded Panama Canal on their way to Asia. The ability to avoid the long trip around the southern tip of South America will make this a feasible way to profit from the larger amount of oil and gas available due to sustainable fracking technology in the USA. This is a clear case of the interrelationship of investment and Panama Canal Expansion delays. Japan has shut down its nuclear power plants and needs fossil fuels. The USA has much greater supplies and a willing buyer. Because the Spanish led consortium low balled the expansion bid and because the Canal Authority let them, losses on investment and Panama Canal Expansion delays are irrevocably intertwined. Ports along the East coasts of the Americas have been upgrading facilities in order to receive large vessels. These investments will have to wait to bear fruit due to a possible work stoppage in Panama. 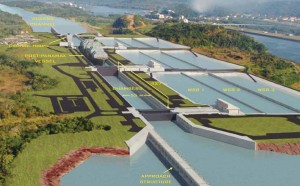 Not Now but Eventually

Investment and Panama Canal Expansion delays are the focus of today. However, Panama still falls within our Three Good Offshore Investment Ideas. With time Panama and its local economy will be a direct beneficiary of the expansion. It may simply take another year or two.