Does the Chinese Stock Meltdown Hurt You?

How Is Alibaba Doing?

When Alibaba had its initial public offering we wrote about whether to invest in Alibaba or not and asked where will Alibaba be in a year? Alibaba opened at $93 on the first day and climbed to $114 in three months. Then the stock slid down to $60 by the middle of 2015 when stocks in China peaked. While the Chinese stock market was melting down in the second half of 2015 Alibaba was recovering and finished the year at just over $80 a share. However, the first days of 2016 have not been kind to BABA. As shown on Google Finance the stock has gapped down on successive days and trades at $70 a share. 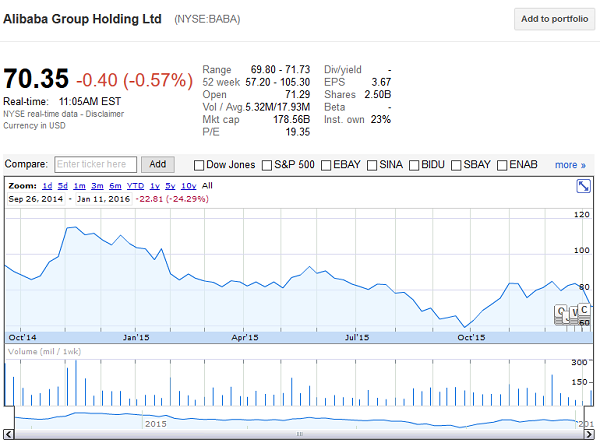 While Alibaba has not performed as many investors would have liked it has not experienced the meltdown seen by many Chinese companies that are traded only in China. Why have stocks on the Shanghai stock exchange melted down so badly?

Over Priced and Badly Managed

The plunging Chinese market is overpriced. Many mom and pop Chinese investors bought real estate until the real estate bubble threatened to burst. They pulled their money out of property and invested in stocks driving prices excessively high. The stock market bubble burst in mid-2015 taking a third of market value with it. Another 15 percent went away in the first days of this year and regulators are having a hard time managing the decline. The Washington Post writes about deepening worries about Beijing’s hand on the crisis.

China’s stock slide showed no signs of easing Monday, steamrolling over attempts by Beijing regulators to stem a dive that has battered markets around the world.
The Shanghai Composite dropped more than 5 percent, dragging down Asian and European markets and extending last week’s losses.

The market has now lost 15 percent of its value in just six days of trading, renewing questions about the state of China’s economy – and the Communist Party’s capacity to manage it.

However the Chinese stock markets are not closely linked to the economy in China unlike in North America, Europe or Japan. The issue for Western investors not is a Chinese stock meltdown will hurt you but rather the world wide ripple effects of the substantial slowdown of the Chinese economy.

Developing Economies Feed Off a Growing China and Now What?

For years many nations in the developing world prospered as they sold commodities such as oil, coal, iron ore and various food stuffs to an economically growing China. However, China’s growth was based on borrowing money to build a bigger industrial base in order to export more and more the rest of the world. When the Great Recession it China reduced orders for raw materials from much of the developing word and nations like Brazil fell into recessions worse than the Great Depression. In turn these nations now import fewer finished products from China, Europe and North America. How the slowing Chinese economy hurts you is by slowing the global economy.

China’s yuan is overpriced and the Chinese are going to loosen their peg to the USA dollar and let it slide toward what the market determines. This will make Chinese products cheaper and more competitive and may have already set off a Forex race to the bottom about which we wrote on our sister site, Forex Conspiracy Report. Wealthy Chinese are already pulling money out of China, converting yuan to other currencies and buying property in the West. The Chinese stock market meltdown is a symptom of a larger ailment in China whose cure is going to be and time and perhaps social upheaval in the land of Managed Capitalism.

Does the Chinese Stock Meltdown Hurt You? PPT

Is It Safe to Buy Stocks Again?

Stocks That Will Buck the Tide in 2016