A strong message from Donald Trump during the presidential campaign was that he was going to reduce environmental regulations and bring back jobs in the coal sector. That is probably not going to happen. In the USA coal mining companies like Peabody Energy, Arch Coal, Cloud Peak Energy and Alpha Natural Resources produce about 491 million tons of coal a year. This may be the peak of their production and not the trough because power companies are relying more on natural gas and renewable energy sources. They are even closing coal burning power plants. And that includes are areas where coal is mined! There is a bleak future for coal despite the hype of the Trump presidency.

According to Forbes the US electrical system is switching from coal to natural gas.

For coal, a smashing combination of low gas prices and increasing environmental regulations has caused power producers to choose gas (and other sources) over coal. Since 2010 alone, gas for power is up nearly 33% to 9.7 Tcf a year.

Through July this year, gas power burn is up 10%, when the hottest summer ever recorded (here) surged demand to an all-time record of 38.2 Bcf/day. In stark contrast, coal demand for power is down 25-30% since 2010. Gas now supplies some 35% of our electricity, double its share 15 years ago. 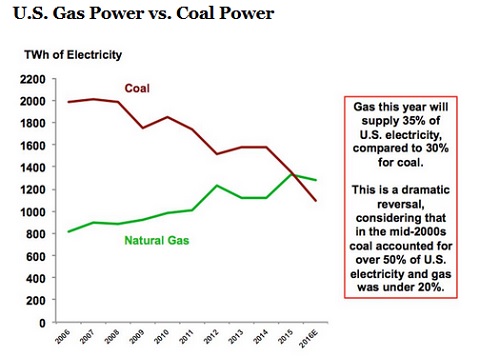 Electric companies have been switching plants from coal to natural gas and closing coal plants. Big consumers like GM and Toyota insist on clean energy and won’t use coal even if environmental regulations are relaxed. That is the bleak future of coal.

Peabody Energy is the largest coal producer in the USA as well as in Australia. The stock sold for $27 a share in 2013 and then steadily fell down to $2. It spiked briefly in late 2015 to $24 and then fell again. The company entered bankruptcy in early 2016. Seeking Alpha refers to Peabody Energy as a hedge fund hotel.

Peabody Energy (NYSE:BTU) is one of the saddest stories in recent SA history. The name was followed, and probably owned, by tens of thousands of SA readers. The company extended its leverage for growth, particularly in Australia. When the downturn for the coal industry came, bankruptcy followed. This is typical of many companies in the energy business.

What followed was not typical. The bankruptcy settlement reserved much of the proceeds to certain of the stakeholders, notable a core group of creditors and Peabody management. Stockholders were wiped out and retail unsecured bondholder`s received much less than they expected.

Considering the bleak future of coal and the strong hand that management and hedge funds have in these matters, there seem to  be good stocks to avoid if you don’t own them and to get out of it you do.