A decade-long project that will change global shipping patterns forever is coming to fruition in the Central American country of Panama. The century-old Panama Canal is getting a set of larger locks that will allow virtually all ships on earth to pass from Atlantic to Pacific and vice versa. According to the Panama Canal Authority the Panama Canal Expansion is 97% finished.

Testing of the new locks is underway with a target date of June 2016 for completion. As with all projects of this magnitude there are delays. However, by the end of 2016 or early 2017 container shipping on a grand scale will be able to pass thorough the new Panama Canal locks. 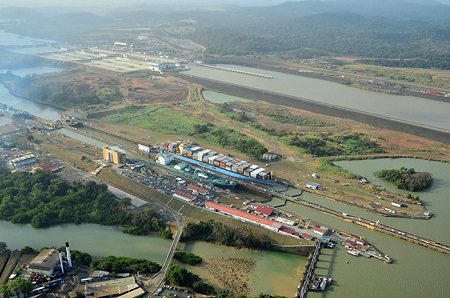 As we mentioned in our September 2014 Panama Canal update

When this major construction project is finished it will more than double the cargo capacity of the century old canal. When finished the expanded Panama Canal will change shipping patterns and affect ports up and down the East Coast of the Americas.

Here is an example of current thinking on the effects of the Panama Canal Expansion.

Forbes writes about the effect of canal expansion on industrial Houston.

Such a monumental shift is destined to alter trade routes, creating winners and losers in the global cargo race. One winner should be greater Houston, whose industrial giants, led by the Port of Houston, might beat out West Coast competitors in attaining foreign goods. As Port of Houston executive director Roger Guenther recently explained to me in a sit-down interview, the Panama Canal has already connected Houston to two prominent global regions. Houston area manufacturers both receive and ship goods, via the canal, from several Latin American countries, namely those down South America’s western coast. And it connects Houston with East Asian powerhouses like China, Japan, South Korea, and the Philippines.

Ports along the entire eastern face of the Americas have been dredging harbors and installing larger cranes to accept the larger boats that will be passing through the expanded canal. And governments and businesses have been preparing for changes in trade patterns that will occur as a result.

Fox New Latino reports on the trial phase of the expansion.

GUPC, the consortium building the new Panama Canal locks, said that in the next two months it would conduct more than 2,000 trials in the Pacific and Caribbean sectors of the expanded waterway, focusing on gates, valves, electric power and control systems.
At the end of the trial period, called by GUPC “an essential part of the project’s optimization,” there will be navigation tests during the second week of May with a vessel leased by the Panama Canal Authority, or ACP.

Only when testing is complete will the project be handed over the Panama Canal Authority for operation. And now all they need to hope for is rain!

When Will the Rains Come?
One of the reasons that there is a canal across the Isthmus of Panama is that they get a lot of rain there. The heavy rains fill the lakes and passages in the interior of the country allowing ships to cross. Yearly rainfall on the Pacific end of the canal averages 67 inches a year will the Caribbean end averages 131 inches. However, El Niño caused the last rainy season to be historically dry. This was great for the folks working on the new canal locks but has resulted in a 5.5 meter lowering of the water level in part of the canal. The American Journal of Transportation reports draft restrictions to transiting vessels to go into effect next month.

The Panama Canal Authority (ACP) has issued an Advisory to Shipping, which sets a draft restriction for all shipping agents, owners and operators working with the Canal.
These temporary and preventive measures will be taken due to an anticipated climatic variability event related to El Niño, a climate phenomenon resulting in periodic warming of the tropical Pacific Ocean. When this occurs, El Niño changes the pattern of rainfall in many regions of the planet. In this case, it has triggered a drought in the Canal Watershed, causing the water levels of Gatun and Alhajuela Lakes to fall substantially below their average for this time of year.

This last happened in 1997-1998 and is expected to remedy itself in the coming rainy season.

How Do You Start Investing in the Stock Market?