Is Gold Dead as an Investment?

Is gold dead as an investment? The dollar is stronger and stocks are going up. The Wall Street Journal reports that gold slips farther as the US currency and stocks look better and better.

Gold prices fell Monday on a stronger dollar and as gains in equities lured investors away from haven assets like precious metals.

The most actively traded gold contract, for June delivery, was recently down $15.30, or 1.3%, at $1,185.40 a troy ounce on the Comex division of the New York Mercantile Exchange.

Gold retreated further from $1,200 an ounce as the dollar climbed against other currencies. The dollar advanced against the euro and the Japanese yen, with The Wall Street Journal Dollar Index recently up 0.5% at 87.54.

Dollar-denominated gold becomes more expensive for foreign buyers when the greenback strengthens against their home currency.

As the dollar [marches] higher, some analysts say gold is quickly losing its appeal.

The point of owning gold for the long term is that it is a hedge against inflation and devaluation of so called fiat money (fiat currencies). 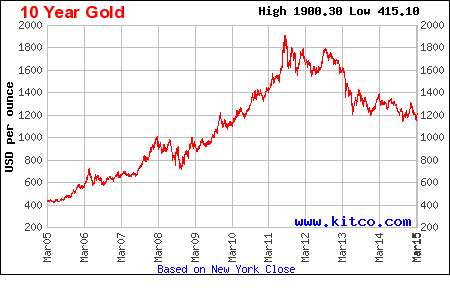 What Is Fiat Money?

Fiat money is currency that a government has declared to be legal tender, but is not backed by a physical commodity. The value of fiat money is derived from the relationship between supply and demand rather than the value of the material that the money is made of. Historically, most currencies were based on physical commodities such as gold or silver, but fiat money is based solely on faith. Fiat is the Latin word for “it shall be”.

The problem with currency is that there is not enough gold and silver in all their forms and uses in the whole world to back up the major currencies (USD, GBP, EUR, CHF, CAD, AUD, YEN or Yuan). So the necessary choice is a currency that is backed by the full faith and credit of the government in question. For the USD, GBP, EUR etc. this works out pretty well. For the Argentinian, Ukrainian and Venezuelan currencies, gold works out better. So, is gold dead as an investment? It is not if you live in one of the countries whose currencies are on the road to oblivion. For right now gold is not doing so well versus a strengthening US dollar.

A Too Strong Dollar

Investment capital goes where there is opportunity for profit. A measure of the strength of the US dollar is the concern of China’s central bank chief who believes that investment capital will flee China and go to the USA to take advantage of the stronger dollar.

China’s central bank governor said Sunday that the U.S. dollar DXY, +0.68% could grow “too strong” and prompt capital flows out of China and other nations. Speaking at an annual forum in the Chinese city of Boao, People’s Bank of China Gov. Zhou Xiaochuan said monetary easing by major central banks was driving up the U.S. currency, while adding that he saw “more room” for China to further ease policy if the economy remains soft and inflation continues to weaken, according to comments carried by Reuters.

Is Gold Dead as an Investment? DOC

Is Gold Dead as an Investment? PDF

Is Gold Dead as an Investment? PPT

How to Invest Your Inheritance