Farmland is attracting growing interest from pension plans, hedge funds and even mom-and-pop investors as they seek to diversify assets and capitalize on an agriculture-industry slump that has pushed down land prices in some regions.

Financial-services giant TIAA-CREF announced Tuesday that it has raised $3 billion for its second global farmland-investment partnership, exceeding its initial target of $2.5 billion. The fund, which will invest in North and South America and Australia, has lined up commitments from institutional investors, including the New Mexico State Investment Council and the U.K.’s Greater Manchester Pension Fund.

Investors are betting farmland will yield good long-term returns as global food demand rises with growing populations and wealth in Asia, Africa and elsewhere. The amount of arable land is expected to increase only modestly, at best, due to urbanization and a lack of acreage suitable for crops.

The tag line for this sort of investment is gold with a coupon. A farmer can invest in farmland, live on the property and grow crops or raise livestock. An outside investor who chooses to invest in farmland is betting that the price of land will go up and that there will be a healthy cash flow from the property. How realistic are these expectations?

The Price of Farmland

What are prices like in the American Corn Belt and where are they likely to go? AG WEB provides insight into Iowa farmland values.

The scales have tipped for Iowa farmland values. After several years of dramatic increases, this year marks a drop in value.

“This the sharpest decline since 1986,” says Mike Walsten, editor of LandOwner newsletter.

But, Walsten says, you should keep these numbers in perspective. “The value of Iowa farmland is still double what it was 10 years ago,” he says. 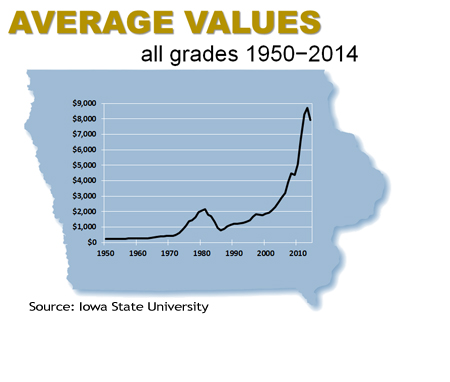 The chart from AG WEB shows the average price per acre of Iowa farmland since 1950. The rise in prices since 2000 is reminiscent of the rise of gold. The difference is that the correction has occurred later than with gold. Will farmland follow gold to lower prices?

Midwestern (Corn Belt) farmland experienced two value peaks in the twentieth century. One was in the period before and immediately after World War I and the other was during the inflationary surge of the 1970’s. Before you go and invest in farmland at this point on the price curve read the late 1970’s article about factors affecting agricultural land prices.

In the twenty years that preceded 1920 there was a 245% increase in the value of farmland (including improvements) before land values fell sharply. Today’s [as of 1977] escalation in land values – 364 percent between 1957 and 1977 – prompts some pointed questions. Have land values reached their peak? If not, when will they plateau if ever? Will they decline and, if so, will the descent to sudden or gradual?

The answer to the 1977 era descent question is that values in the 1980’s fell rather rapidly as interest rates rose, inflation came under control and the stock market went into an extended climb. The writer notes that while productivity should be what drives farmland prices (coupled with demand) the perception of land scarcity is a big driver of farmland prices. If you want to invest in farmland you should ask yourself if interest rates will go up and if the current farmland price curve is going to follow the examples of the twentieth century and dive farther before flattening out.