What Is Happening to Silver?

When the economy is on the brink of collapse like in 2008 everyone wants to buy gold and silver. Precious metals are a hedge against inflation and the ultimate protection against a collapse of fiat currencies. What is happening to silver and gold is that the primary fiat currency, the US dollar, is getting stronger. An article in Forbes wonders if a silver breakdown has just begun.

[G]old and silver have been building a two year-old wedge pattern – a chart pattern that often leads to sharp moves in the direction of the breakout. Since then, precious metals have fallen sharply due to the calming of Greece-related fears, the stronger U.S. dollar, and lower oil prices. The latest gold and silver breakdown brings the metals dangerously close to breaking down from the wedge patterns.

What is happening to silver is that it is flirting with a substantial decline as the US Federal Reserve contemplates higher interest rates and the EU seems set to settle the Greek debt dilemma. The Forbes article looks at what is happening to silver from a technical perspective. The history of silver prices is a better guide. There are periodic upward swings in silver prices based on economic panic and then collapse, such as when the Hunt brothers tried and failed to corner the silver market in the late 1970s.

Each year, the Silver Institute works with Thomson Reuters GFMS, a leading research company that is based in London, to prepare and publish a comprehensive report on that year’s silver supply and demand trends, with special emphasis on key markets and regions. This annual survey also includes current information on prices and leasing rates, mine production, investment and fabrication. 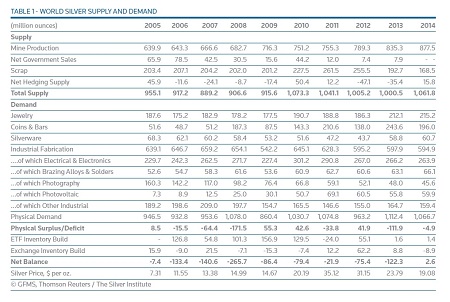 In the last ten years the world silver supply has risen from 955 million ounces to 1,016 million ounces. Demand has risen more slowly. In 2005 the net balance that demand exceeded supply by 7.4 million ounces and in 2014 supply exceeded demand by 2.6 million ounces. What is happening to silver is that supply is exceeding demand at a time when investors prefer stocks and US dollars to precious metals.

How Low Can Silver Go?

Business Standard reports that silver is at a six year bottom.

Weak trend persist in the precious metal segment since 2013 after the US Fed reported a recovery in its economy. Early this week, too, the US Fed chair Janet Yellen hinted that the US economy is recovering as per expectations, which suggested that a proposed interest rate hike may be possible this year itself.

Interestingly, the US dollar hit one month high on Friday to 1.08 against the Euro on positive economic outlook in the United States which is expected to rebound investors’ trust towards the US treasure resulting into emergence of dollar demand.

What is happening to silver is that the reasons to buy and hold silver are going away and there are good reasons to sell. When will silver hit bottom? When it does will that be the time to buy? After silver fell off its $110 an ounce peak in the late 1970s it preceded steadily down to the $5 an ounce range over the next ten years and stayed there for a decade. Investors should think long and hard before buying silver, even at substantially lower prices.

What Is Happening to Silver? PPT

Tags: gold and silver prices, precious metals as a hedge against inflation, what is happening to silver
Previous Post

What Happened to Apple?