Recently, SeekingAlpha’s Jason Aycock was interviewed about a single highest-conviction ETF position. Here’s the text from that interview:

Which single asset class are you most bullish (or bearish) about in the coming year? What ETF position would you choose to best capture that?

The previous 12 months for the U.S. equity markets were modestly profitable, but in large part the rebound from March 2009 has tapered off substantially. The markets have regressed into a choppy pattern, which makes it the perfect environment for selective and active investment. At the same time, periods of uncertainty still loom across the globe, so individual business risks remain high. In my view, the active investor will find the optimal performance using targeted exchange-traded funds (ETFs) that focus on emerging markets.

The single asset class that I believe will outperform over the next 12 months is small-cap Brazil stocks, as represented in the Market Vectors Brazil Small-Cap ETF (BRF). There is clear growth potential with all emerging-market small caps, but there is higher stability in the Brazilian markets than competitors. Not only do I believe BRF will perform in the next twelve months, but I think it is a great selection for the next five years going into the 2016 Rio Olympics.

Brazil’s political support of its markets is strong, as they are reportedly going to repeal the 2% tax on foreign investors by year-end. The government is taking every measure to incentivize markets in the short term and I expect they will continue this to ensure a strong reputation is projected to the world during the Rio Games. BRF is one ETF that you should not ignore.

How does BRF fit into your overall investment approach? Tell us a bit about your strategy and goals.

There were very few U.S. investors that wanted into Brazil in the ’90s – there just wasn’t any reason to take on that sort of risk compared to the reward in the U.S. markets. That time is over and now investors need emerging exposure. During the United States’ “lost decade” Brazil quietly moved further away from a primarily agriculturally based economy into a manufacturing-based secondary economy. Now they are successfully growing the services-based tertiary economy that investors find the most stability in. The simplest way I can quantify this is in the charts. 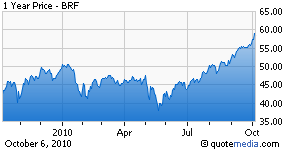 My approach is primarily based on technical strength. Investors and traders alike have come to realize that strong fundamental data does not always equate to a strong stock performance; the role of alternative methods of investment selection has grown. Technical analysis is one of those methods. Once only a curiosity to most, technical analysis is now becoming the preferred method for many. But technical analysis tools are like fireworks – dangerous if used improperly. That’s why ETFTRADR.com is such a valuable tool to those who follow us and trade our technically driven portfolios.

This is the foundation of my Brazil small-cap selection and how it fits within our approach. As of now, Brazil makes up 20% of our emerging-market exposure and that’s about 13% of the total portfolio. To get the full report on our longer-term portfolio holdings you can sign up free and receive the specific ETFs and allocations at our site.

Tells us a bit more about the area. What makes it your top pick?

It’s hard to talk about Brazil without mentioning the usual suspects that are typically placed in the same group – the BRIC countries. BRIC (Brazil, Russia, India, and China) countries make up what is expected to be the new world economic leaders of the future. These countries are largely expected to replace the traditional western economic leaders (United States and Europe) in the coming decades, some faster than others.

Consensus is clear that China and India will be the eventual leaders based on sheer size, but Brazil has a story of its own that is quite different than any other. Furthermore, within Brazil it is the small-capitalization stocks that will benefit from the growth most.

The well known Brazil ETF EWZ will also benefit, but I specifically do not hold this due to the underlying holdings. Of the top 10 holdings in EWZ, nearly 50% are in Energy and Material names, which are highly correlated. As I mentioned earlier, with the emergence of these BRIC economies we will see an incredible shift in consumer demand.

That’s why I prefer BRF to EWZ – it’s better diversified across sectors and does have much more exposure to consumer discretionary and financial sectors. You can see the breakdown and top holdings here: 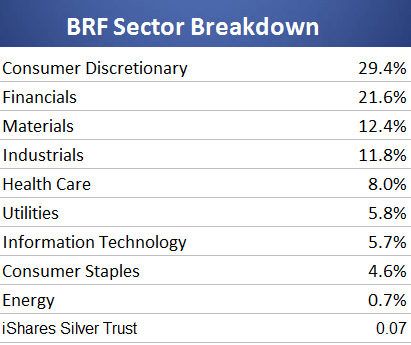 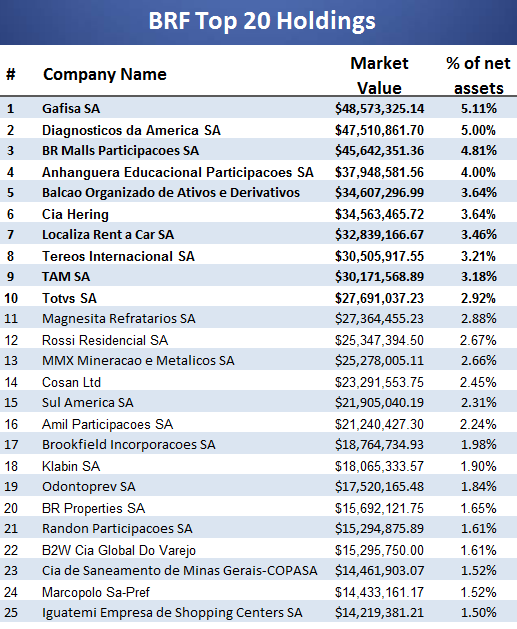 Are there alternative ETFs that could be used to capture the same theme? What makes BRF your first choice?

Not only is it clear that all of Latin America will benefit from a Brazilian economic powerhouse, but so will all Brazil ETFs, naturally. There are two alternatives to BRF that I would recommend looking at. First off, the main alternative is iShares MSCI Brazil (EWZ), which is also the most liquid of all Brazil ETFs. Investors should also consider the iShares S&P Latin America 40 Index (ILF), in which 60% of holdings are Brazilian.

It would behoove investors to compare and contrast BRF with ILF and EWZ – make no mistake about it, BRF is the best Brazil ETF for growth investors over the next 12 months. It’s all in the holdings when it comes to rating ETFs, and this is where many investors make mistakes.

Most investors choose the wrong ETF because they don’t understand the underlying holdings. I specifically chose the small-cap Brazil ETF (BRF) over the better-known large-cap Brazil ETF (EWZ) because it better represents what’s happening in Brazil. Nearly 72% of EWZ is invested in Energy, Materials and Financial stocks, which makes this ETF borderline not diversified enough; compared to BRF, it is inferior. As noted earlier, BRF is 1) more diversified sectorwise and 2) more weighted to benefit from the growth in consumer spending. That’s a sector play rather than a Brazil play.

Does your view differ much from the consensus sentiment in this area?

Sentiment on Brazil does not differ from sentiment toward all BRIC countries; not surprisingly it’s still bullish. Recently, the chief executive of Brazil’s development bank, Luciano Coutinho, confirmed that economic conditions now make investment in Brazil a great prospect.

According to the financial official, the government is working hard to diversify Brazil’s economy and there are a number of sectors that now present very interesting investment possibilities. Agriculture, telecommunications, a strong banking sector and a large pool of natural resources, including the recent oil discoveries, are all creating a highly positive investment climate, stimulating confidence to invest in Brazil.

Outside experts are also bullish on Brazil; in fact, well known real estate billionaire Sam Zell is an unapologetic bull on Brazil – recently asserting “The No. 1 country in the world for investment right now is Brazil.” Zell’s company, Equity Group Investments LLC, is the principal shareholder of Gafisa SA (GFA), the second-largest house builder in Latin America, based in Brazil. You will notice that Gafisa is currently the top holding in BRF, with a 5.11% share.

Even with broad support for my Brazil outlook, the vast majority of investors are letting Brazilian small caps continually elude their portfolios. This is why BRF is not the common choice, but rather the best.

What catalysts, near-term or long-term, could move the sector significantly?

Small-cap stocks in Brazil (and other emerging markets) are volatile, so it’s not a groundbreaking revelation to say that BRF will be volatile too. That said, I do expect BRF to show net growth even if we see short-term downside volatility increase.

Brazil’s stability is far greater than many of their peers on the emerging space; however, this instability is a large concern with regard to risk of loss. Small-cap Brazilian stocks will benefit greatly from a government that is dedicated to market health and growth. There’s a lot that can move small-cap Brazilian stocks, and with BRF it’s mainly going to be consumers’ purchasing power in Brazil.

In late September, Bloomberg BusinessWeek reported that Brazil will be ending the 2% tax on foreign investors, to spur additional investment in the country. It seems that it is only a matter of when, not if, this tax relief will come, so this is expected to have a longer-term positive impact on all Brazilian equities. Finally, with the growth in power of Brazil comes higher scrutiny on the political ties it has with other countries. And Brazil does continue to strengthen its strategic relationship with Russia, India and China – while it also shows signs of political resentment towards the U.S. by refusing to sanction Iran over nuclear program progression. Even with our strong ties to Brazil there is an element of risk with the geopolitical landscape.

What could go wrong with your pick?

To reiterate what I discussed, and what is true with any emerging market, there are certain political risks involved with investment. In my view, there is far more political influence trying to grow the Brazilian economy just based on tax policy alone. Brazil wants foreign investment and is willing to provide a discount.

Of course, speculation can be different than what actually happens. The major policy changes made in the last 12 months, and the expected changes over the next 12, could increase volatility substantially, so light-hearted investors may prefer lower-beta options.

Going back to my roots as an analyst and looking at BRF from a technical perspective there is good and bad. First, the bad: Looking at BRF on a daily and weekly chart we see that BRF is potentially overextended or overbought. It is my belief that the strongest trends continue to persist, so overbought is generally a sign of strength to me – not a sign of imminent reversal. That said, in extreme overbought conditions we can see sharp profit-taking or even corrections take place – the key to your success is to understand that these pullbacks are ideal entry points for BRF.

Broad consensus states that all BRIC countries will outperform developing countries (i.e. the U.S. stock market), and while this may be true in the long term, successful investors will be selective with BRIC investments. The most successful investors choose the best investments, and with the new landscape provided by BRIC countries, success will not come differently. In my view, Brazilian small-caps are the best way to leverage BRIC growth for your portfolio over the next 12 months and possibly for the next 12 years.

In previous interviews we’ve noted that of the BRICs, China and India are expected to have fast-growing economies, but with some volatility that could be tamped down by an improved savings rate. Brazil’s savings rate of around 15% is the lowest in Latin America and well below a global average of around 23%; could this be an additional source of volatility? Or does it mean more pressure for foreign investment there?

What is Equity Investing?

Learning How to Invest