The Panama Canal Expansion is the largest project at the Canal since its original construction. The project will create a new lane of traffic along the Canal through the construction of a new set of locks, doubling the waterway’s capacity. The existing locks allow the passage of vessels that can carry up to 5,000 TEUs. After the expansion the Post-Panamax vessels will be able to transit through the Canal, with up to 13,000 TEUs. The Expansion will double the Canal’s capacity, having a direct impact on economies of scale and international maritime trade.

According to the Panama Canal Authority completion percentages for the various sub projects are as follows as of January 2015.

The project broke ground in 2007 and had an expected total cost of $5.2 Billion. The original competition date was in 2014, the centennial year for the canal but has been moved back by labor disputes, cost overruns and contract renegotiations.

A Live View of Construction

The Panama Canal Authority web site provides access to live webcams at the various locks and overlooking the construction. Click the image for a choice of webcams. The image below is of lock construction. 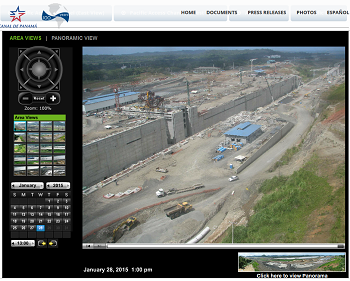 These are live feeds and update every few minutes so you can watch ships pass through the locks and see daily progress on the locks.

The old joke about the space program was that astronauts sat on top of rockets with thousands of critical parts ALL MADE BY THE LOWEST BIDDER! That was also the case with the Panama Canal Expansion Project. A year ago Reuters published an article about how taking the lowball bid turned into a problem for the Panama Canal Authority.

A bitter dispute between the Panama Canal and a Spanish-led consortium of construction companies over the spiraling cost of expanding one of the world’s busiest waterways was years in the making.

The two sides are at odds over who should pay for $1.6 billion in cost overruns to build a third set of locks for the canal, the main part of the expansion of the 50-mile cargo route that connects the Atlantic and Pacific oceans.

The bid for the locks only was $3.1 Billion. One of the bidders for the project, Bechtel, was quoted as saying that one could not pour the concrete needed for the new and larger locks at the price that won the bids, much less complete all work on the locks. The contractor blamed the rain (in a country that commonly gets five to seven feet of rain a year in the Panama Canal area). The dispute has been settled to the extent that work resumed. Arbitration began in July over how to deal with $1.6 billion in cost overruns. As of December the contractor consortium had $2.3 Billion in claims before the arbitrators and as of December 31 arbitrators granted $233 million in claims. The project completion date has been moved back to 2016 but no month has been specified.

Effects on Global Shipping and American Energy Products to Asia

The ability of huge ships to pass through the Panama Canal will change global shipping patterns. Ports up and down the Eastern coast of the Americas have been dredging deeper entrances and adding larger cranes in order to deal with “Post Panamax” shipping. Circle of Blue notes that big effects will be felt far and wide from an expanded canal.

In every major study that assesses the new canal’s influence on trade, including a 2013 report by the U.S. Maritime Administration, researchers find that among the project’s big effects will be increasing the flow of American energy products to China and Japan.

Bit by bit the Panama Canal Expansion advances and perhaps in 2016 we will see the start of far reaching effects of this effort.

Profit from an Overpriced Stock Market